Guide to Environment variables in Go 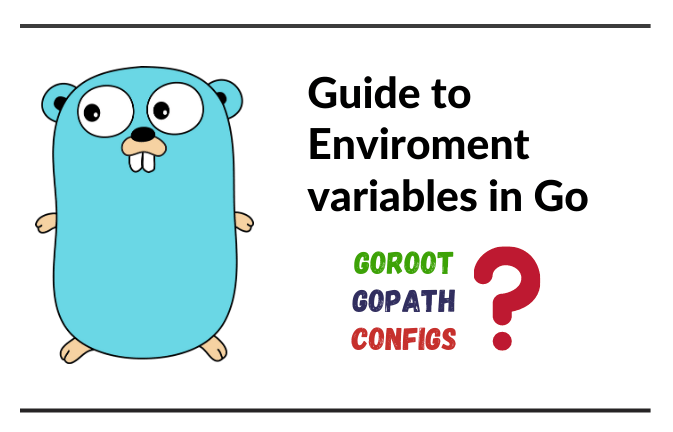 What are the environment variables?

Trying running echo $HOME this will display your current user home directory. For me it’s like - /home/mohit . The result may vary based on your OS. Since I am using Ubuntu, the results might be different on your machine. But, concepts remains the same 😎

These environment variables can be set/unset or used anytime similar to how variables work in our programs.

You can see all the environment variables in your system with env command.

There are many variables that come with Golang when you install it and can be configured as per use. Some of the most used ones are -

This is the path where the Go standard library is located on your local filesystem. You generally won’t need to modify this unless you want to use some other versions of Go as well. It is set to /usr/local/<go-version> by default

This variable defines the root of your workspace. It tells Go where to look for your code. It stores all the files necessary for the development of the programs. It consists of three directories -

By default, it is unset and points to a subdirectory named go in the user’s home directory. ($HOME/go on Unix, %USERPROFILE%\go on Windows)

A Go module proxy is any web server that can respond to GET requests for URLs of a specified form.

GO proxy allows control over the download source and provides caching as well. This serves the zip archive of source code over HTTP making it faster.

You can use the proxy server by setting -

The above proxy is run by the Go team. To make changes permanent , add it to ~/.bashrc.

GOOS defines the operating system for which to compile code. Examples are linux, darwin, windows, etc. This is an optional environment variable by default is set to empty.

Now that you have learned the basics of environment variables and some default ones provided by Go, you might be wondering to use it in your own projects. Configs should be used to store all kind of important information which can be easy to change. This also provides additional security to your passwords, secret keys to be directly available in your source code and are visible to anyone who has access to code.

That’s a lot of explanation but it was required so that you don’t push secrets and use configs. There are a lot of ways to manage configs in go projects via .env,.json,.yaml, .toml and other formats. For simplicity, for now we will set the environment variables via code -

Here, the program is pretty straightforward where we first set the variable and then fetch it with os.Getenv(), then we unset it using os.Unsetenv()

There are a couple of other useful methods -

Well, it is not a good practice to use these secrets in your code directly. To solve this there are a number of libraries like godotenv, etc.

Here, the code below uses godotenv - You can get it using go get github.com/joho/godotenv

In this code, we first load the environment variables from a .env file in this project directory. Then, we fetch the REDIS_PORT key. The .env file looks like -

In case you are looking for pre-shipped packages, There are many useful open-source packages which help in managing environment configs -